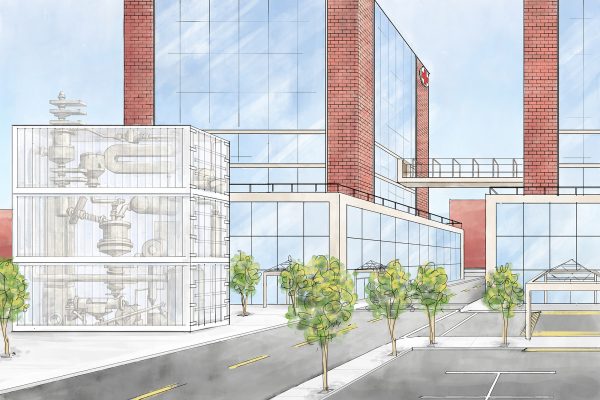 Can microgrids that use a waste-to-hydrogen process move municipalities and community choice aggregators (CCA) closer to energy independence?

Can microgrids that use a waste-to-hydrogen process move municipalities and community choice aggregators (CCA) closer to energy independence?

That’s the bet of a new partnership that is angling for the community microgrid market as wildfires lead to outages and hundred-year storms occur more frequently across the country.

The team — Local Power, an energy consultancy, and hydrogen Ways2H solutions producer — has yet to choose the first waste-to-hydrogen community microgrid installation, but is considering a community in Massachusetts according to Paul Fenn, founder and CEO of Local Power.

Rendering of a hospital with a waste-to-hydrogen microgrid. Courtesy of Ways2H

In addition to hydrogen, the anticipated 200-500 kW community microgrid solar arrays will include two kinds of battery storage (stationary and for electric vehicles). Hydrogen and batteries can power the microgrid as needed, making energy available at any time.

Hydrogen produced from waste is made with a thermochemical process that converts waste biomass into renewable hydrogen, according to Ways2H. They currently use this patented process in two Japanese cities.

The method can extract hydrogen from some of the world’s worst waste streams, including medical refuse, municipal solid waste, plastics, sewage sludge and other organics, without incineration to produce clean fuel for mobility and power generation, the company’s news release says.

As to cost, Fenn states that each system will be hand-tailored to the CCA’s specific attributes. “Our pricing is guaranteed at or below equivalent power. If we cannot do that, we will not bid on it,” he added.

Describing the partnership of Local Power and Ways2H, Jean-Louis Kindler, CEO of Ways2H said, “We are bringing an integrated approach and a concrete solution that we believe many municipalities are looking for, as they seek technology and resiliency they currently don’t have. Our goal is to help local governments build affordable, renewable energy microgrids to power their communities and critical infrastructure, from hospitals to schools, energy-critical businesses and resilience hubs for residents regardless of utility blackouts.”