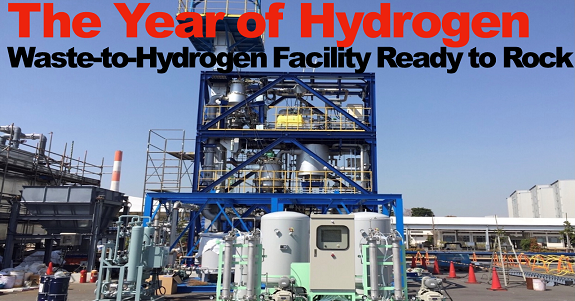 Great coverage of our JBEC/Tokyo press release from The Digest/Biofuels Digest.

News comes from the Land of the Rising Sun that a first-of-its-kind Tokyo facility will convert sewage sludge into renewable hydrogen fuel is now complete. Ways2H Inc. and its shareholder and technical partner Japan Blue Energy Co. say the waste-to-hydrogen facility will process 1 ton of dried sewage sludge per day, to generate 40 to 50 kilograms of hydrogen per day, enough to fuel 10 passenger vehicles or 25 fuel-cell e-bikes. And in case you didn’t notice, this year’s Olympic torch left Fukushima a little over a week ago fueled with, yep, you guessed it – hydrogen!

In today’s Digest, details on the Tokyo facility, the advanced thermochemical tech behind it all, other hydrogen facilities in the works, and other hydrogen news so far in 2021 that makes hydrogen hotter than ever.

Take It Away Tokyo

Why is this big? The project will produce clean hydrogen for fuel cell vehicles while demonstrating that this waste-to-hydrogen technology can quickly scale commercially, in Japan and globally. That’s right, commercial scale for waste-to-hydrogen is finally here.

With construction, led by TODA Corporation, now complete, the companies plan to start ramping up operations by mid-2021.

The waste-to-hydrogen facility, located at the Sunamachi Water Reclamation Center near Tokyo Bay, will process 1 ton of dried sewage sludge per day, to generate 40 to 50 kilograms of hydrogen per day for the Tokyo Metropolitan Government, enough to fuel 10 passenger vehicles or 25 fuel-cell e-bikes.

In addition to wastewater sludge, plastic, paper, municipal solid waste and other refuse will be processed. The waste is heated to a high temperature and converted into a gas, from which pure hydrogen is extracted. The facility is carbon-neutral and generates its own fuel in a closed-loop process.

But this is just the beginning as Ways2H CEO Jean-Louis Kindler told The Digest that “In a year, we will have two demonstrators in full operation, as well as most probably one or more large commercial solutions contracted and under construction. The two demonstrators are small onsite 1 ton/day waste to 40-50 kg/day hydrogen in Tokyo and southern California. There is a larger waste-to-hydrogen facility being developed in the French Caribbean – more details to follow in coming months!”

The California waste-to-hydrogen facility will be installed later this year and will be the same size as the Tokyo facility, processing 1 ton/day of waste and producing 40-50 kg of hydrogen/day, but the California facility will process municipal solid waste, not sewage sludge.

And there are about two-dozen more waste-to-hydrogen projects at various stages of development in Europe and other regions around the world, Kindler told The Digest, and details will be announced as they move forward.

“In 5 years, we will have grown to global presence, with our systems in operation in North America, Asia and Europe,” said Kindler. “Renewable Hydrogen produced via our solutions will be powering clean, zero-emission mobility, as well as power generation in selected areas. We will also have started the implementation of carbon negative integrated systems, effectively removing CO2 from the atmosphere.”

In a Digest exclusive interview with Kindler, he explained the tech behind Ways2H. Essentially, Ways2H uses an advanced thermochemical process that heats waste at a high temperature, converts it into a gas, then extracts the hydrogen in a separate process.

The Ways2H process converts waste from a solid to a gas, then reforms the gas to produce hydrogen. The hydrogen recovery process does not burn or incinerate any waste. Instead, the system converts the waste into hydrogen, other gases and pure carbon – called char. The char is used as fuel to generate energy and heat, which is dispatched to the waste via heat carriers, in the form of ceramic beads that heat to a high temperature – about 1,000 degrees C – and are released into the waste, which is heated to create syngas, from which hydrogen is then extracted.

The system self-supplies the energy and heat it needs to operate and produce hydrogen. The process does not require outside fuel (except to start up a new unit for the first time). Unlike traditional synthetic gasification, the process can handle any kind of waste, including MSW, plastics and medical refuse, and it is self-balancing. Yep, that’s right, ANY kind of junk can be turned into precious hydrogen.

The facility was developed and built in partnership with the Tokyo Metropolitan Government, TODA Corporation, TOKYU Construction, CHIYODA Kenko and researchers at Tokyo University of Science to help Japan meet growing demand for renewable hydrogen while demonstrating a new pathway for sustainable disposal of waste.

So why is a California-based Ways2H working with Japan? “Japan is working to build out hydrogen infrastructure for mobility and power generation as a key part of the nation’s strategy to scale renewable energy, reduce emissions and reach carbon neutrality,” said Kindler. “The Japanese government explains their approach here and here in the Harvard Business Review.”

In fact, the Olympic Torch, fueled with hydrogen, left Fukushima last week and some people are calling this the Hydrogen Olympics. “Japan is betting on hydrogen fuel-cell vehicles, more than other nations, in the race to reduce greenhouse gas emissions and Toyota and Honda produce fuel-cell passenger vehicles,” said Kindler.

Reactions from the Stakeholders

“Renewable hydrogen is an important clean energy fuel for Tokyo and the world,” said Naoki Dowaki, Ways2H Board Member and President of Japan Blue Energy (JBEC), the technical partner on the project and process patent owner. “We spent over a decade developing this advanced process to convert waste into hydrogen and it is encouraging to see hydrogen demand growing in Japan and globally, as we complete our first Tokyo hydrogen production facility.”

Ways2H, Inc. uses a carbon-neutral thermochemical process to convert waste biomass into renewable hydrogen. The process is net-zero carbon by itself and carbon-negative when paired with carbon capture and storage. The company’s patented process extracts hydrogen from the world’s worst waste streams – municipal solid waste, medical refuse, plastics and organics – without incineration to produce clean fuel for mobility and power generation. A joint venture between U.S.-based Clean Energy Enterprises and Japan Blue Energy Co., Ltd., Ways2H is a unique solution for the global $400 billion+ solid waste management market and the rapidly growing hydrogen economy, estimated to reach $2.5 trillion by 2050.

With 95 percent of the world’s hydrogen produced from natural gas and coal, Ways2H and JBEC are working to supply clean hydrogen to replace fossil fuels for mobility and power generation.

Check out their slide guide “The Digest’s 2020 Multi-Slide Guide to Hydrogen from Biomass and Waste” here.

Get the details on Ways2H future plans from our exclusive Digest interview with Ways2H CEO, Jean-Louis Kindler here.

As we’ve said before, everyone loves hydrogen technology at scale and now that the Tokyo facility is complete, we see it as only the beginning for waste-to-hydrogen on large scale levels. We expect news soon from Ways2H on their California facility as well as their third project planned in Pune, India, and there is no sign of hydrogen news dying down in 2021, so stay tuned!