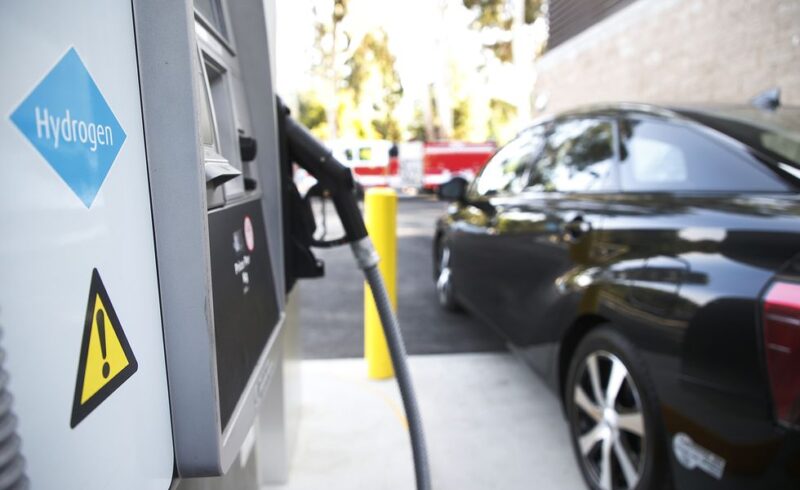 Excerpts from Steven Cole Smith’s article for Car and Driver. Click below for the link to the full article.

Despite supply hiccups, and past promises that have never quite come to fruition, hydrogen-fuel technologies continue to improve, and the future still looks bright. Two promising solutions are headed to California.

CORRECTION 5/10/2021: The type of hydrogen produced by the Ways2H process is renewable hydrogen, not blue hydrogen.

Martin Tengler, Tokyo-based lead hydrogen analyst for BloombergNEF, likes to talk about how we’re on the cusp of at least the fourth pro-hydrogen near-frenzy since 1974. That’s the year Road & Track touted “Hydrogen: New & Clean Fuel for the Future” on its March cover. They probably didn’t mean more than 45 years in the future.

And then there was 2009, when multiple auto manufacturers signed a joint letter of intent that by 2014, they would be selling hundreds of thousands of hydrogen-powered cars. That didn’t happen, either.

But this next near-frenzy might be different, Tengler believes. Just in the past year, forecast growth, or at least interest, in hydrogen power has grown beyond even recent predictions. While most automakers have announced ambitious electrification plans pegged to plug-in vehicles, Honda recently made sure to include hydrogen-fuel-cell vehicles in its goal to phase out gasoline engines in North America by 2040. Daimler Trucks and Volvo have partnered in Europe to try to help cut costs and make hydrogen make financial sense for long-haul trucking.

Why is Tengler optimistic now? Especially as California, the one place in the U.S. with hydrogen infrastructure, continues to wrestle with supply in the face of even modest demand. Because costs will begin to decrease considerably for hydrogen production, and not just dirty “gray” hydrogen produced by, say, fossil fuels or coal-generated electricity, but of non-polluting green hydrogen.

Costs could dip below $1 per kilogram of hydrogen by then, compared to an average cost of $16.51 per kilogram in 2019. The hydrogen-powered Toyota Mirai averages about 73 miles per kilogram, according to the EPA.

Interestingly, though, this latest hydrogen frenzy has little to do with cars. In fact, Tengler said, “Hydrogen may not be the best fuel for cars.” Compared to electricity, that is.

What has Tengler and his forecasting team excited about hydrogen is its industrial future, making steel, plastic, and cement, which it does now, and powering airplanes, ships and trains, which it doesn’t. At the head of the cost-reduction predictions are, Tengler said, solar PV. Solar photovoltaic, or PV, combines words for light (photo) and electricity (voltaic). Solar PV is how solar converts sunlight into electricity, and the process can also be used to create hydrogen fuel. “Falling costs of solar PV are the key driver,” Tengler said, behind his enthusiasm for hydrogen, which reflects his enthusiasm for solar.

“Such low renewable hydrogen costs could completely rewrite the energy map,” Tengler said. “It shows that in the future, at least 33 percent of the world economy could be powered by clean energy for not a cent more than it pays for fossil fuels. But the technology will require continued government support to get there—we are at the high part of the cost curve now, and policy-supported investment is needed to get to the low part.”

So solar is one potential solution to improving the hydrogen supply. Two others could make their way to California by the end of the year.

Jean-Louis Kindler, co-founder and CEO of Ways2H doesn’t yet practice what he preaches. “I drive a gas guzzler,” he said. “I love my gas guzzler.” Sure, he’d like to drive something powered by hydrogen to the nearest Trader Joe’s, but the available inventory of hydrogen-powered vehicles doesn’t much appeal to enthusiasts of large or sporty vehicles, but Kindler thinks it’s coming.ADVERTISEMENT – CONTINUE READING BELOWhttps://27c717ec03e7f581f07bec4404f065d7.safeframe.googlesyndication.com/safeframe/1-0-38/html/container.html

And by then, he’ll be able to pump processed garbage into its tank.

Kindler’s company plans to build relatively small hydrogen refineries near garbage dumps, separate out the metal and glass, and use the rest—from milk cartons to cat litter to what is described picturesquely as “sludge”—to make renewable hydrogen.

About 90 percent of today’s hydrogen is “gray,” made with electricity or fossil fuels. The hydrogen is then loaded into tube trailers towed by tractor-trailers and delivered to refilling stations, the majority of which are in California; that delivery is the most expensive part of the per-kilo price. As clean energies go, blue hydrogen is better. (“Green” hydrogen, the type that could be produced by solar, is the Holy Grail.)

Kindler’s first Ways2H refinery is coming from Japan, three containers that will go on the boat in June, and could be producing hydrogen from garbage in California by the end of the year. Where in California? He isn’t ready to say. Larger systems would be built in place, but Kindler wanted to start with a smaller one to illustrate its portability. It will be a modest operation at first, taking garbage from the community where its located, then returning the hydrogen to the city to power.

The standard-sized Ways2H system “processes 24 tons of waste per day, for a 1- to 1.5-ton hydrogen yield,” said Kindler, enough to fill the tanks of 200 to 300 passenger vehicles.

“Did you know there are 30,000 hydrogen-powered forklifts in America?” he said. We did not. But it makes sense—no pollution inside the warehouse, and no three to four-hour downtime as they recharge their batteries.

Kindler said the refineries are scalable, and can be made much larger to produce commercial hydrogen that can be marketed. A major customer? The long-haul trucking industry, which is hard at work on hydrogen-powered vehicles.

And, for Kindler, maybe a big, comfortable hydrogen guzzler, as soon as somebody makes one.

For the full article, please visit:

Improving The Environment While Producing Hydrogen