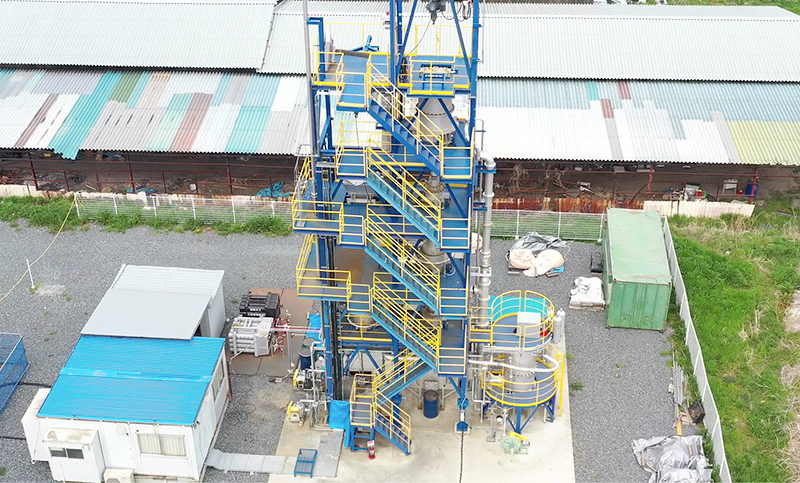 Ways2H plans to build a waste-to-hydrogen facility in California using technology that was demonstrated at this plant in Joso, Japan.

To most people, the so-called hydrogen economy is still a blurry dream: the assembly of an emission-free global energy system based on the world’s simplest, lightest and most abundant element. And the hope is that by 2050,
various uses of it will emerge to limit the dangers of climate change.

To get there, however, researchers warn that preparations must begin now. Two recent studies coupled with a business plan announced today put a sharper focus on some of the efforts underway.

A Long Beach, Calif., company — Ways2H — says it’s teaming with two other businesses to produce hydrogen from some of the world’s most troublesome wastes in a way that will also help reduce the accumulation of humanmade carbon dioxide, the atmosphere’s most abundant greenhouse gas.

“We can use hydrogen to connect systems that aren’t connected right now,” Ways2H CEO Jean-Louis Kindler said in an interview. The company is about to introduce a process in California that can decompose medical
wastes, urban sewage sludge, plastics and agricultural residues.

The process, developed in Japan, will allow the company to capture hydrogen and to collect and sequester the CO2 that would have been emitted from the wastes if they had been allowed to decompose in landfills — the usual, worldwide disposal method. “Our goal is to improve the global environment by producing carbon-negative hydrogen, while offering sustainable waste disposal,” Kindler added.

Another goal is to make money by collecting fees to dispose of the wastes and then selling the resulting hydrogen as a fuel to companies that can use it. One of Ways2H’s targets, Kindler noted, is a growing number of filling
stations in California that sell hydrogen for fuel cell-powered electric cars. Another is school districts that have begun to buy cleaner fuel-cell buses to transport students.

“We see big opportunities for new renewable hydrogen technology,” said John Brabender, a vice president of Ford, Bacon & Davis, a Baton Rouge, La., company that is partnering with Ways2H. It has a history of developing
projects that use renewable energy.

A third company, Tokyo-based Japan Blue Energy, will provide modular and transportable waste-to-hydrogen units that use a patented thermo-chemical process to convert the wastes to hydrogen that it has been testing in
prototype facilities.

The first stage of the process, as Kindler described it, will use temperatures as high as 1,202 degrees Fahrenheit to “crack the molecules of waste” and then trap the gaseous emissions that result. The residue from this will be a
carbon char that can be burned, providing a relatively pure heat source for the process.

By carefully controlling temperatures, Kindler explained, the formation of tars that can foul the gasification process can be avoided.

Ways2H plans to build a waste-to-hydrogen facility in California using technology that was demonstrated at this plant in Joso, Japan. JBEC/Tsubasa Engineering Ways2H expects to have two “commercial-sized” systems in California by the end of this year, where Kindler said there have been “several commercial inquiries.” He said he expects demand for hydrogen fuel for cars and buses will grow in coming years.

Last week, the National Renewable Energy Laboratory (NREL), part of the Department of Energy, published a study that predicted “hydrogen has the greatest potential among technologies” for storing renewable energy
produced by solar and wind power in the future.

Omar Guerra, a research engineer at NREL and lead author of the study, said it tracked the costs and utility of 80 storage scenarios, measuring the costs of creating hydrogen from electrolysis of water, against two other common energy storage methods: recovering the energy in stored compressed air and using pumped storage methods that rely on pumping water uphill when energy is plentiful and letting it flow through turbines when it is more needed.

In an interview, Guerra explained that the study showed that the use of hydrogen stored after using renewable fuels for electrolysis will also be more cost-effective than storing electricity made from renewable energy in
batteries. He said historical trends showed that the price of using the stored hydrogen to create electricity will drop sharply, to the point where hydrogen-fueled generators can also replace “peakers,” or diesel-powered generators that many utilities use to generate electricity during peak demand periods.

“We calculated not only the costs, but also the benefits,” Guerra said, noting that “peakers” produce air pollution, while hydrogen-powered generators are relatively clean-burning.

“The greatest value of hydrogen storage is its flexibility. That term is key, here,” Guerra said. He noted that in the future, the nation’s grid systems will require large amounts of “seasonal storage.” For example, when fall turns
into winter, there will be less solar energy than wind, but solar energy converted to hydrogen when solar energy was in excess can be used weeks later to supplement wind.

He said excessive storage of hydrogen can also be adjusted by selling it to companies that make it into ammonia for fertilizers or that can resell it as fuels for cars and trucks.

A study recently released by Lawrence Livermore National Laboratory, a DOE lab in California, predicts that the combination of using more renewable fuels, storing excess renewable energy by turning it into hydrogen and using methods to remove more CO2 emissions from the air — such as capturing carbon emissions from wastes — will help California become carbon neutral by 2045.

The study predicts that preparations in California, which has already approved a mandate to reach the 2045 target, “put the finish line in reach.”

Roger Aines, chief scientist for the laboratory’s energy program, said the costs could be “less than expected” — and that the results would boost the state’s economy, create jobs, and benefit air quality and wildfire prevention.