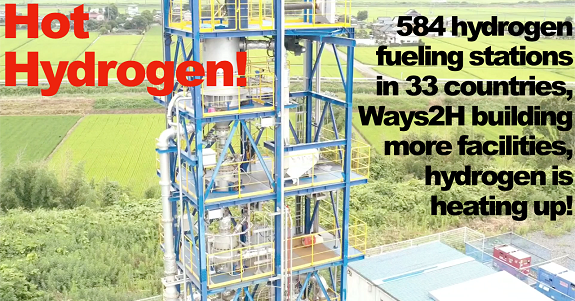 The Digest’s exclusive interview with Jean-Louis Kindler regarding ECMB Capital Partners and more.

Hydrogen is heating up around the planet – but not in terms of CO2 or GHG emissions – in fact, it can help cool the planet down. What is making hydrogen so hot right now is the news that hydrogen fueling stations are having a dramatic acceleration in growth with 584 hydrogen stations deployed in 33 countries by the end of this year, Ways2H’s fundraising and expansion on new orders and building of new facilities to produce renewable hydrogen, Canada getting one of the world’s largest green hydrogen plants, Preem and Siemens and others moving forward on blue hydrogen, cities like Barcelona powering city buses from green hydrogen, and Hydrogen Council’s latest reports on the path to hydrogen competitiveness.

In today’s Digest, why hydrogen is off to a hot start in 2021, the latest hydrogen news you need to know, an exclusive interview with Ways2H’s CEO, Jean-Louis Kindler, and more.

“Hydrogen is the new biofuel, without CO2 tailpipe emissions!” – That’s what Ways2H’s CEO, Jean-Louis Kindler told The Digest in an exclusive interview.

News came in from Ways2H and parent company Clean Energy Enterprises about new fundraising for Ways2H as it executes on new orders and builds facilities to produce renewable hydrogen for mobility and power generation.

A bit of background – Ways2H converts municipal solid waste, sewage sludge, plastics and more into renewable hydrogen using a thermochemical process that is carbon-neutral by itself and carbon-negative when paired with carbon capture and storage. Ways2H is developing waste-to-hydrogen production facilities in Japan, California and India, and has new projects in the pipeline in Europe and other locations around the world. Check out The Digest’s 2020 Multi-Slide Guide to Ways2H here for more background on the company and tech.

Back to the news – just days ago, Ways2H Inc. and its parent company Clean Energy Enterprises announced they engaged capital markets advisory firm ECMB Capital Partners Inc. as part of efforts to increase Ways2H’s financial capabilities as it pursues new commercial projects around the world.

“With global demand for renewable hydrogen growing quickly, investors are increasingly interested in this sector and we see significant opportunities for Ways2H’s innovative technology in this space,” ECMB’s Managing Partner, John A. Costigan, said. “We are thrilled for the opportunity to be part of Ways2H’s exciting growth trajectory at this key moment in its development.”

“With the deployment of our first renewable hydrogen systems onsite, we expect to contract several commercial projects during 2021 and appreciate ECMB’s additional financial expertise as we develop facilities to meet demand for clean hydrogen in Europe, Asia and the Americas,” said Ways2H CEO Jean-Louis Kindler.

So what does this mean for renewable hydrogen market as a whole? Kindler told The Digest, “Today, the industry primarily sees renewable hydrogen coming from electrolysis powered by renewable electricity. This is obviously a great solution but one needs to keep in perspective the fact that the move towards a massive development of Battery Electric Vehicles will directly increase the load on existing power generation infrastructure. This infrastructure is still relying on fossil sources for more than 70% globally. Indeed, the renewable power fraction is steadily increasing, but battery electric vehicles development will add more demand to the grid. Then hydrogen production would also add further load.

“We offer a solution that does not rely on renewable electricity to produce hydrogen, leaving renewable electricity for the needs of the grid,” said Kindler. “Furthermore, we produce hydrogen while solving another global issue: waste management. Landfills, as well as incinerators, are not in public favor and are a source of greenhouse gasses. We propose to use that waste, almost 2 billion tons per year worldwide, and extract the hydrogen it contains in a renewable and clean manner. And this has the potential to be a significant contribution to hydrogen production. 2 billion tons waste would yield approximately 100 million tons hydrogen. The total gasoline consumption in the United States in one year is equivalent to 55 million tons hydrogen. In addition to these global 2 billion tons, the Oak Ridge National Lab “Billion Ton Report” states there is a potential of 1 billion tons biomass available in the United States. This is another potential 50 million tons hydrogen, almost enough to cover the country’s gasoline consumption.”

When asked for details on their projects, Kindler told The Digest, “We are currently building two transportable modular systems that are due to be delivered, one in Tokyo very soon and another one in California within Q2 2021. In addition, we are in discussion with an Indian partner to deploy another of these modular systems in India before the end of the year.”

“Furthermore, we are in active discussions with prospects for larger stationary plants in the US, France, Spain, the UK as well as eastern European countries,” said Kindler. “Most of these projects are motivated by the pressing need for waste processing operators to find alternatives to landfills, particularly for plastic waste. These companies see an additional benefit in the opportunity of being part of the development of the worldwide hydrogen production infrastructure.”

“Our standard stationary system design processes 24 tons of waste per day, for a 1 to 1.5 ton hydrogen yield,” said Kindler. “This is enough hydrogen to fill approximately 200 to 300 passenger vehicles’ tank. Interestingly, it is the number of vehicles serviced by the average gasoline stand in the US.”

What the future holds for Ways2H?

“In one year, we will have at least two or three of those stationary systems under construction,” said Kindler. “In five years, we should reach several dozens, following the exponential growth of hydrogen fuel infrastructure. To use the same gasoline stand analogy, there are about 120,000 gas stands in Europe, for 150 hydrogen fueling stations. In the US, we have 110,000 gasoline stands for a current 80 hydrogen fueling stations. Future stations will have to offer three different kinds of fuels: the gasoline we know (which does include biofuels), electricity for battery electric vehicles, and hydrogen for hydrogen fueled vehicles, should these be fuel cell or converted internal combustion engines.”

“Our systems can easily supply power and hydrogen, from the surrounding waste that unfortunately is plentiful, wherever there is human activity,” said Kindler. “We will be very busy.”

For the full article please visit: